The Legend of Vixen Tor

The Legend of Vixen Tor

Between Princetown and Tavistock stands the largest mass of granite on Dartmoor, known as Vixen Tor.  Many, many years ago Vixen Tor was the home of a wicked old witch named Vixana.  Vixana lived in a cave at the foot of the tor, a cave which had been constructed at her command by the earth gnomes over whom she had power.

Vixana was an evil witch who hated people and whose only pleasure was in making people suffer.  She was tall but extremely thin and bent as if she was perpetually walking against a strong wind.  She had a large hooked nose, a yellowed wrinkled face, no teeth except for two greenish yellow fangs which protruded over her lower lip like those of a wolf, and thin straggly hair which would have been grey had it been washed and combed.  Her eyes were yellow and seemed to glow when she was angry or became excited.  She always carried a gnarled stick, which she used for walking and for knocking the heads off flowers and swiping at the honey bees which came within reach.

Each morning Vixana would emerge from her cave and climb to the top of the tor where she would scan the surrounding countryside looking for unwary travellers.  If she was fortunate enough to sight a traveller she would become excited and her eyes would glow evilly.  When the traveller came to that part of the track which skirted the bog that lay at the foot of Vixen Tor, Vixana would wave her stick and call up a thick, clinging mist which would envelope the traveller, causing him to lose his way and stumble into the bog where he would be sucked, struggling and screaming to his death.  When Vixana heard the screaming she would cause the mist to disappear back into the bog from whence it came so that she could feast her eyes and gloat over the last terrified struggles of the unfortunate traveller.  The last sound heard by the victim was the evil cackling of the old witch.  The track past Vixen Tor soon became known as a dangerous track and wise travellers would take an alternative longer route which wound over the roughest part of the moor.

Now at this time, on another part of Dartmoor, there lived a handsome young moorman who had certain wonderful powers.  The young moorman had, at some time previously, performed a service for the Pixies and for this service he had been granted two gifts.  The first was the gift of clear sight, the ability to see clearly through the thickest mist or fog, a very useful ability on Dartmoor which is so frequently shrouded in mist.  The second gift was a ring which, when placed on his finger, turned him completely invisible.  When news of the missing travellers reached the young moorman he decided to investigate and set off along the track to Vixen Tor.

Some days later, the old witch was in her accustomed position on the top of Vixen Tor watching for unwary travellers.  She was in an evil temper, muttering to herself and swishing her stick at any insect which came within range.  The reason for her temper was that, for weeks now, no one had come along the track and she has been unable to fulfil her evil ambitions.  Suddenly she espied the figure of the young moorman in the distance and, cackling to herself in glee, she prepared for his arrival at the fateful bog.  The moorman walked steadily and unhurriedly until he came abreast of the bog at which time Vixana called up the mist which completely enveloped the young moorman.  The moorman, however, because of his gift of clear sight, was able to stick to the path and proceed normally.  Vixana was waiting eagerly for the sound of his despairing cries, her eyes glowing and her bent old figure straining forward.  When she saw the moorman appearing unharmed she gave an angry frustrated scream and started to weave another spell.  Hearing her scream the young moorman looked up and, at once realising the danger he was in, slipped the ring on his finger and became invisible.  Vixana was bewildered; she could see no one against whom she could direct her spell.  She moved over to the edge of the tor and strained over, watching impatiently for a sight of her intended victim.  Meanwhile the young moorman made his way round to the other side of the tor, crept up and, catching the old witch unawares, pushed her over the edge where she fell screaming to her death on the rocks below. 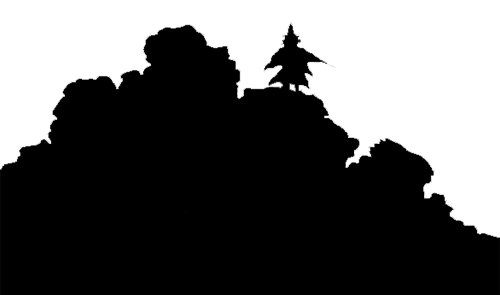 The people of the moors were so delighted to be rid of the evil old witch that they presented the young man with enough money to buy a farm of his own.  He settled down there and eventually married a beautiful young bride from a neighbouring village.  Travellers were always welcome at his farm and, when people became lost on Dartmoor as they so frequently do, the young moorman was always the first to volunteer to search.  He and his bride lived happily together for many, many years and performed many good deeds but none which is so well remembered as the destruction of the evil old witch.