The Legend of the Abbot's Way

The Legend of the Abbot's Way 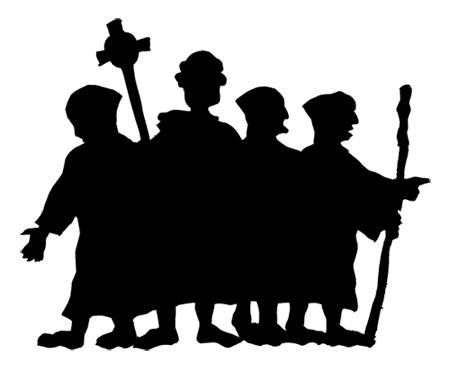 Long, long ago, in the reign of Edgar the Peaceable, the country of Dumnonii and the region of Dartmoor was ruled by a great chief named Ordulf, the brother-in-law of the King.

This man was a veritable giant, was also a good man and a well beloved chief.  He was filled with a great desire to do something very special to honour his god.

One bright starry night, as he was standing on top of one of the Tors, Ordulf saw a column of fire shining in the valley of the Tavy.  He realised that this was a sign that he should build a monastery to the glory of God in that particular place.

An immense Benedictine monastery was founded and dedicated to St Mary and St Rumon.  This became known as Tavistock Abbey.  At that time there were other Abbeys and monasteries around the borders of Dartmoor, but the wealthiest and most important of them were Buckfast Abbey, Plymstock Abbey and Tavistock Abbey.  The monks of these abbeys were on friendly terms and often exchanged visits, making long journeys on foot across Dartmoor to do so.

Between Buckfast Abbey and Tavistock Abbey lay a wide stretch of wild bleak moorland with areas of treacherous bog, high tors and fast flowing streams but across this stretch was a well worn track winding between the tors, fording the streams and skirting the bogs.  This track was the one trodden by the monks on their frequent visits.

After many years of friendship a quarrel broke out between the monks of Tavistock and Plymstock, and Walter, the Abbot of Tavistock set off for Plymstock hoping to resolve the quarrel.

Almost as soon as the Abbot had gone, four of the monks who had long resented the Abbot’s authority and the austere life they led, decided to make the most of his absence.  Whilst the other monks were concerned with work within the abbey, the mutinous monks spent their time feasting and drinking.  When they had exhausted the Abbot’s wine cellar, they purchased more wine from Buckfast Abbey to replenish their stocks.

Before long they received word that Walter the Abbot had patched up the quarrel with Plymstock and had set off for the Scilly Isles to inspect Abbey property there.  On hearing this the wicked monks once more resumed their riotous living and merry-making.  Among these wicked monks was one called Milbrosa who, whilst under the influence of drink, entered the Abbey church, took the costly silver communion vessels from the altar and sold them to a band of wandering gypsies.  When sober, Milbrosa realised the enormity of his crime and was filled with fear and remorse at the sacrilege he had committed.  He confessed his crimes to his companions and implored their help to recover the sacred vessels.

One of the four suggested that they visited a rich old Jew, the owner of a blowing house, and persuade him to lend them money.

Blowing houses were places where tin was smelted and, as they were arriving they saw the old Jew leaving with a heavily laden pack horse.  They suspected that it was either tin, which was very valuable, or possibly even gold which was even more valuable and, filled with greed, decided to ambush the old Jew and rob him.  Taking a short cut, they concealed themselves at a place when they knew the old Jew would have to pass and when he arrived, leapt out and overpowered him.

Finding his packs filled with gold they rejoiced at their good fortune, and, devoid or all Christian virtues, committed the final sin by killing the old man and his horse, concealing them in a nearby bog, so that no trace of their evil deeds remained.

The monks hurried off to re-purchase the treasures which they had sold to the gypsies, then, feeling secure in the belief that their evil deed would never be found out, returned to the abbey.

When they awoke next morning, they found that it had snowed during the night and the surrounding countryside was covered with a thick white blanket of snow.  Even better, they thought, this would still further conceal their crime.

Later that day, when the monks were seated at supper, they were informed that a messenger had arrived from the Abbot of Buckfast asking that they travel there to hear about a wonderful miracle that had happened and to join in the rejoicing.  The messenger would lead them.  The evil monks, sensing more feasting, decided that they would be the ones to go and set off behind the messenger.

The messenger had started off while the monks were making ready their horses, so they had to gallop after him.  They had great difficulty in distinguishing features in the gathering gloom and were quite content to follow their guide who rode on in silence.  Suddenly the moon shone out through a gap in the clouds and the monks were horrified to see, lit up by the shaft of moonlight, the very spot where they had committed their horrible crime.  They gazed at each other in fear, then, as one, turned to look at the guide who turned and threw back his cowl.  To their absolute horror they saw before them the face of their victim, the old Jew.  As they watched trembling, the figure was slowly transformed into a grisly skeleton whose eyeless sockets seemed to be staring blindly at them, horror upon horror, an arm was outstretched and a bony finger beckoned slowly and deliberately.  As though hypnotised, the four monks rode forward and found themselves trapped in a deep bog.  Within minutes the horses and monks had disappeared into the bog, never to be seen again.

As time passed and the monks remained missing, the Abbot Walter, who had found out about their misdeeds at the abbey, caused enquiries to be made but nothing was known.  The more superstitious of the monks believed that they had been carried off by the Evil One, but Abbot Walter was of the opinion that they had missed the track and perished on the moor.

To prevent this recurring he ordered a number of granite crosses to be erected marking the path between the monasteries.  He also issued a command that every monk journeying along the track should stop at each cross and pray for the peace of the souls of the four who had perished crossing the moor.  To this very day, that track, which can still be followed, is known as The Abbot’s Way.