The cuckoos that arrive on Dartmoor in the summer have flown over 10,000 miles from Africa. That’s some journey! I hope you are lucky enough to hear one before they make the return journey back to Africa in July or August.

By simply stopping and listening to the sounds around you, you can enhance your enjoyment and connection with the natural world. This game can be played in the garden or you can stop to play it when out on a walk.

The idea of this activity is to take some quiet time to listen to the sounds of nature through the familiar game of Bingo. You will use a Bingo card to mark which sounds you have heard during the listening exercise, trying to get a complete row. You will learn about the types of sounds in your area, natural or caused by humans and perhaps be able to identify your favourite or least favourite sound. 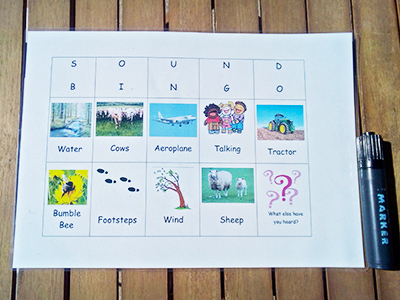 You need to prepare a bingo card for each person that is going to play. I have created some specifically to the sounds that you might hear on Dartmoor but you can make your own to match your area. You could draw the pictures or just use words.

Hand out a bingo card and pen or pencil to each player and take them to the selected spot to conduct the listening exercise. You want to be as spread out as far you can to really concentrate on listening but close enough that players can still hear instructions.

Explain to the players that they will be taking part in a listening game for 3 minutes. If 3 minutes is too long you can shorten it to what you think is appropriate. During this time players can mark their Bingo card as they hear a particular sound. Have in mind how many sounds your players need to hear to reach ‘Bingo’. For example if you want them to get 5 in a row, explain that they should wait until the end of the listening exercise to shout “Bingo” so that it doesn’t interrupt other students trying to listen.

Tell your players to close their eyes and begin listening to the sounds around them. They will have to open their eyes to cross of the sounds they hear on their Bingo card!

Once the time is up, ask your players to stop and if any player has shouted “Bingo”, get them to go through the sounds they heard. You can then ask any other players if they heard any other sounds that were not listed.

Would the sounds be different in different locations?

What sounds do you think you might hear on Dartmoor that you wouldn’t hear in your garden, and how might the sounds on Dartmoor differ from those in a town?

Enjoy, my game of Sound Bingo – get your deer’s ears ready, Ralph