Many places and features on the map of the West Country are named after giants – giant’s basins, giant’s chairs, giant’s quoits and so on. Where did all these giants come from and why are there so many in Devon and Cornwall? The following story offers one explanation. The story goes that a prince named Brutus set sail from Asia after the Trojan War accompanied by a large following of Trojan warriors looking for a new land in which to settle. After many adventures they landed in Britain at Totnes and found the country inhabited by a race of giants. The Trojan warriors fought and defeated the giants, forcing them to take refuge in the hills and caves of Dartmoor and Cornwall. The leader of the giants, who was named Goemagot and was wounded in the leg and unable to travel, hid in a bog where he was found and taken prisoner. Goemagot was well treated by the Trojans and his wounds soon healed.Brutus decided that there should be a wrestling match between Goemagot and the strongest kinsman of Brutus. Corineus was chosen as the Trojan’s champion as he had previously had experience of fighting with giants in Africa.The rest of the giants who had been driven off were invited to watch the wrestling match.

The wrestling match took place on Plymouth Hoe.  The giants assembling at one end and the Trojans lining up at the other end with the two contestants facing one another in between.  Goemagot was said to be about three times the height of an ordinary man, whilst Corineus was little taller than his comrades. It appeared that it would be an unequal struggle and the giants were confident of victory. 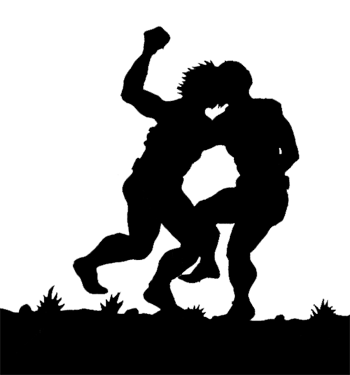 It was a long hard fight. Corineus was the more skilful, but the immense height and strength of the giant prevented him from being thrown by the Trojan.  Eventually the giant managed to seize Corineus in a bearlike hug which broke some of his ribs and the contest appeared to be almost over.  Corineus, however, angry at himself for allowing himself to be caught, found new strength and determination, seized the giant by the girdle and threw him to the ground. The ground shook at the impact and Goemagot lay there breathless and stunned. Seizing his chance, Corineus grabbed the giant, raised him aloft, carried him to the cliff edge and threw him over where he was dashed to pieces on the rocks below.  The sea was stained red with blood for miles around.  Terrified at the horrible death of their leader and of these fierce warriors from overseas, the remaining giants fled, most of them finding their way across the Tamar into Cornwall but many of them settling on Dartmoor where they remained untroubled for many years.

Brutus became the ruler of the whole land to which he gave the name Britain.  For hundreds of years the figures of Corineus and Goemagot wrestling were carved out on the turf of Plymouth Hoe.  One of the giants who settled on Dartmoor was called Blunderbus and his story tells us about an important discovery which benefited all the people of Devon.