The Legend of Grey Wethers

The Legend of Grey Wethers

On the south eastern slopes of Sittaford Tor, are two broken stone circles formed of thirty rough blocks of granite.  They are known as Grey Wethers as, it is said that from a distance, they look like a flock of sheep grazing.  Wether is, of course, another name for sheep.

One day, on the boggy uplands near Sittaford Tor three peasants were employed cutting peat.  For many weeks they had been employed there carving out the blocks of peat and laying them out to dry in the sun.

Before the winter storms set in, the driest peat would be loaded on to ponies using the distinctive crooks or frames which looked something like the prongs of a pitchfork turned up. The peasants would then sell the peat to the Dartmoor farmers for use as fuel during the long cold Dartmoor winters.

As the sun sank from sight, the three men gathered up their slicers, budding irons and turfing irons and made their way homewards.  Home was a crudely built little hut built of granite boulders with a thatched roof overgrown with mosses and lichens. Some people believe that it is now known as Stat’s House. Be that as it may, the house at that time belonged to Rogne who dwelt there throughout the year. Varnes, who was a friend of Rogne, stayed there every summer, cutting peat with his friend.  The third man, who was a stranger to the district, was called Lynhur.  He was an itinerant worker who was employed by the other two for the first time this summer.

That night, after their meal, a storm began to rage. The rain beat down, the wind howled and the thunder roared.

"Tis a wild night," said Rogne, "thank God for a snug warm house".
"I would sooner be out tonight than visit Grey Wethers on a midsummer night", commented Varnes.
"The Grey Wethers?" said Lynhur, looking up, "What is there to be afraid of about them?"
"Hush!", cried Varnes "Do you not know the story then? Why, the shearing of them would make a man rich for life."
"I am a stranger in these parts”, said Lynhur, “What is this tale, I have a mind to be rich."
"I will tell you", said Varnes, "but you will be well advised to avoid Grey Wethers at midsummer.  It is an evil place."

"Many hundred of years ago, a peasant who went by the name of Zorac, one of a tribe of people worshipping Bellus the Sun God, came here to dwell.  Zorac found so much favour in the sight of the god, that, being one without possessions, he soon grew rich.  But Zorac became greedy, and he begrudged having to make sacrifices to the Sun God.

When the day of the great festival of Midsummer came round, and the followers of Belus vied with each other in seeking the choicest offering to make to him, Zorac went in the early morning to the green slopes of Sittaford Tor to choose one of his flock to sacrifice to the Sun God.  As he gazed, he felt that out of all of his flock of forty sheep, there was none among them that he could willingly bring himself to part with. One of his neighbours possessed several lambs that had been born late in the season, and he decide to steal one of them and sacrifice it in place of one of his own sheep. Belus, who knew what the peasant had done, was filled with anger and decided to punish Zorac. When Zorac returned in the evening to where he had left his flock, he found to his amazement they had vanished, but on the green grass where they had been grazing, two circles of upright granite posts were standing in their place.  The god had avenged himself.

From that day Zorac’s fortunes changed and soon he sickened and died, and was buried beneath the cairn on top of Cosdon Hill.

The two circles, as you know, still stand there, and every Midsummer Eve, at midnight, the stones take their former shapes, and, as sheep, graze till morning upon the green slopes of Sittaford Tor."

"What about the legend?" asked Lynhur, who had been listening intently.

"The legend runs, that should anyone succeed in shearing one of these sheep ere sunrise, its fleece, if sprinkled with water that may be found in a deep rock basin on top of Kestor, will turn to gold.  But for the shearing, none other than the shears of the dead peasant must be used, and these it is said, lie buried within the Kistvaen under the cairn beneath which the bones of Zorac rest.

The magic shears, as the legend runs, are of no use until they have been dipped into the river Teign at midnight.

"There is a rhyme about them", said Rogne, “It contains the secret of shearing the sheep, it is written on a piece of parchment.

‘At midnight by the Tolmen, upon the River Teign,
The shears within its water, shall carve thy weal or bane.
Strike on thy left, then on thy right, red blood the flood shall stain.
Beware lest trembling fingers, withdraw the blade again,
But hold it firmly ‘neath the stream, till tress of hair appears,
Which seize and keep to bind the sheep, then use the magic shears’.

Lynhur read it through again and again till he had committed the words to memory, the, returning the parchment to its owner, he sat a long time deep in thought.

All winter Lynhur brooded over the story of Grey Wethers. Finally, he resolved to test out the legend, he would be rich if it were true. The idea became an obsession and he could hardly wait until summer.

At last, a week before Midsummer’s Day, the time was ripe. Lynhur set off for Cosdon Hill and, after a brief search, found the cairn. With the tools that he had brought he set to work and, after a few hours frantic labour, uncovered the stone coffin.  Prising off the lid, he gazed inside. There was a skeleton, a few amber beads, some fragments and, proving the story to be true, a pair of rusty shears.  Clutching the shears, Lynhur set off for the Tolmen stone on the River Teign. On the way, he filled his flask from the deep pool on top of Kestor.

Arriving at the Tolmen just before midnight he knelt down at the river’s edge and recited the words he had memorised.

"At midnight by the Tolman, upon the River Teign.
The shears within its water, shall carve thy weal or bane".
"Strike on thy left, then on thy right."

With that, he plunged the shears into the river. The water hissed and seethed around them, then a dark cloud seemed to pass across the moon, the air turned chill and a low eerie moaning filled the air.

Suddenly, a loud voice rang out,

Terrified, Lynhur withdrew the shears and, as he did so, the foaming, seething water was stained the colour of blood. He gazed in horror then recalling the warning on the parchment plunged the shears once more into the river. A peal of mocking laughter filled the valley and again the voice rang out,

Even as the words rang out, a long tress of woman’s hair rose to the surface and floated past the rock on which Lynhur knelt. Spellbound, he watched it float past him, then, realising it was passing out of reach, he flung himself full length clutching frantically. Though almost too late, he managed to secure part of the tresses. Fully committed now, Lynhur set off to Rogne’s hut, there to await Midsummer Eve.

Midsummer’s Eve saw Lynhur waiting beside Grey Wethers and, despite his terror and excitement, somehow he fell asleep. He was awakened by the bleating of sheep. To his delight, the stones had resumed their former shape and were once more a herd of fine sheep.

He sprang to his feet and, because of the time spent sleeping had no time to spare. Dawn would soon be breaking; he must work fast. Drawing his shears and with the short rope he had woven from the tresses he crept up on the nearest sheep, but, startled, it shied away.  After a lengthy chase it was at last cornered. Frantically Lynhur tied it with his short rope and began shearing as fast as he could.  The shears were blunt and it took time, however piece by piece the fleece dropped to the ground and the peasant gloated over the fortune that would be his at sunrise.  With this thought he was suddenly aware of a lightening on the eastern horizon. The sun was almost rising. Terrified Lynhur tried to speed up his work but suddenly the knots on the too short rope loosened and the sheep made its escape.  Lynhur was now petrified.  Why had he withdrawn the shears from the river?  Why had he not immediately grabbed the tresses instead of letting them float by? The shears would have been sharper, and the rope would have been longer: he would have completed his task. He cursed himself firstly for having started off on the adventure and secondly for his stupid folly at the river’s edge.

Suddenly he remembered the flask of water from Kestor and decided to sprinkle the fleece with it. Before he could make a move however, he became aware of a sense of doom. Looking up he saw the herd of sheep which by now had each assumed gigantic proportions closing in on him, forming once more a circle around him. Closing!  Closing! while he stood petrified. Suddenly a voice rang out,

"Those that seekest to gain the treasure of the dead,
Shall win the fatal gift the grave doth yield instead."

The following day, Lynhur was found dead, pinned below one of the stones which had fallen over on him. Strangers accepted it as a simple accident but the people of the moors knew that the Grey Wethers were guarding their treasure. 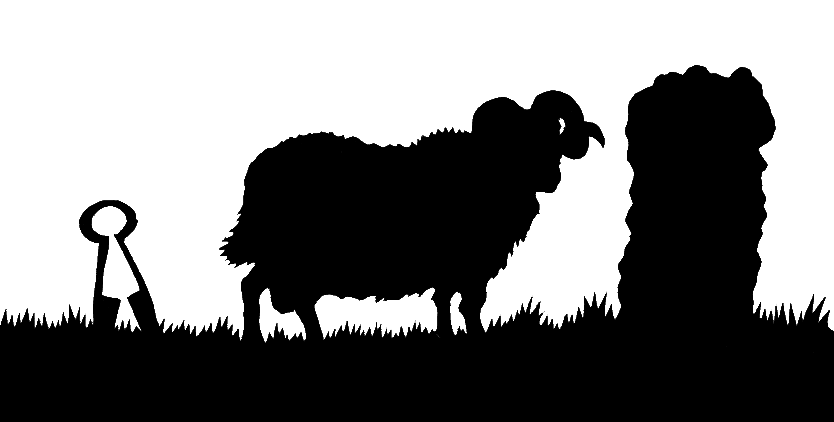