The Legend of the Evil Rider

The Legend of the Evil Rider

Widecombe Church, which is sometimes called the Cathedral of the moor is dedicated to St Pancras.  It lies in a great hollow high up on the old forest of Dartmoor. Once, long ago in 1638, the church was shaken by a terrible thunderstorm.

It was an October afternoon and the congregation, terrified by the dreadful thunderstorm, gathered in the church seeking safety and comfort. The parson, unafraid, carried on with the sermon seemingly untroubled by the falling masonry and the dangers of the terrible lightning which flashed terrifyingly across the heavens. Much damage was caused to the church that day and many people were hurt by the debris as the pinnacle of the tower crashed into the church below. What could have caused such a storm?  The people who live around Widecombe have no doubt. This is their story, the legend of the Evil Rider.

The story starts at the inn at Poundstock where the usual Sunday afternoon company was gathered, exchanging the week's news and quenching their thirsts with the local cider. Suddenly, the sound of a horse’s hooves was heard approaching the inn. The locals could tell by the sound, which seemed to ring eerily in the silence that had suddenly fallen on the countryside, that the horse was a stranger to the district and wondered who could be approaching. A frightened hush fell on the inn, the conversation stilled by an unaccountable feeling of unease.

The locals looked at each other, each waiting for someone else to make the first move, until one, braver or more curious that the others, plucked up courage to peer out through the window. He saw a tall, dark, commanding figure seated on a high coal-black horse which constantly snorted, pawed the ground impatiently, striking sparks with each movement. “Fetch me a flagon of cider”, boomed the figure on the horse when he caught site of the face at the window, “and quickly, for I have a terrible thirst”. The landlady was informed of the order and delivered it, tremblingly, to the strange horseman who threw her two coins before draining his tankard at one gulp them riding off towards Widecombe. The landlady afterwards swore to the customers of the inn that the cider hissed as he swallowed and that she was certain that they had had a visitation from the Devil.

Meanwhile, the Devil, for that’s who it was, had ridden on to Widecombe, where he tethered his steed to a pinnacle of the church tower. On peering into the Church, he noticed that one of the congregation, a young boy, had fallen asleep during the service. This was his chance. Everyone knows that you mustn’t fall asleep in church or you are likely to fall into the hands of the Devil.  The Devil swooped on the poor unfortunate boy and, seizing him by the scruff of the neck, flew off with him up through the roof of the church to which his horse was tethered. Throwing his victim across the saddle, the Devil mounted and rode off breaking the pinnacle of the tower in his haste to make off with his prey. Inside the church the startled congregation were shocked to see the pinnacle come crashing through the roof of the church to the accompaniment of a tremendous clap of thunder.  Though many people were hurt, no one was killed and no one ever found out what happened to the poor unfortunate boy who was never seen again. 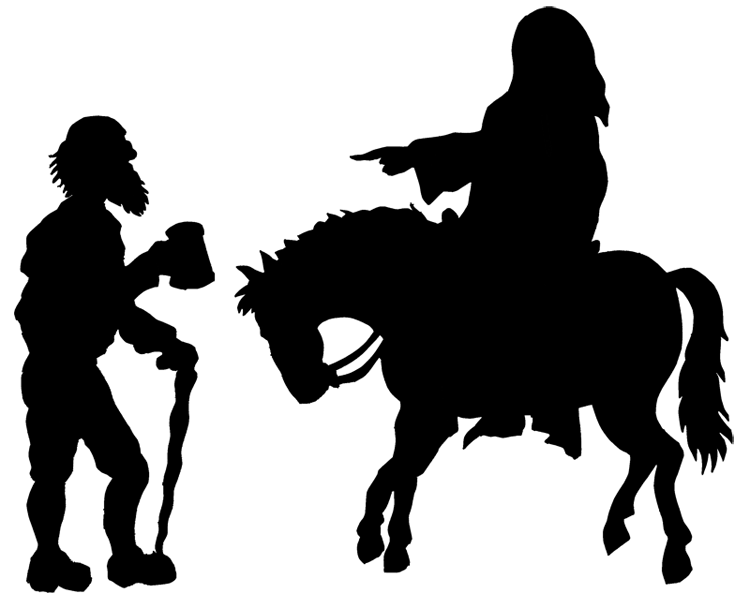 Back in Poundstock, the customers at the inn heard the approaching hooves once more, like thunder, approaching from the direction of Widecombe, reaching a crescendo then dying away in the distance. Not one of the locals dared to look out this time, preferring the confort of each other's company, but one of them suggested that the landlady check the money she had received from the stranger. The money was gone and in its place were two withered leaves. “I knew that money was no good”, said the landlady, but Old George, the oldest of the company had a different explanation, “ ‘Twere the pixies that changed it”, he said. “They knew that the money was evil so to save ee they changed the money for ee.  Better to ‘ave leaves from the trees than evil money: ‘twas a very friendly act I do say.”