The Legend of the Weaver of Deancombe

The Legend of the Weaver of Deancombe

As Exeter was at one time an important centre for the wool trade and depended on Dartmoor for its supply of wool, it is not surprising that at least one of the legends should involve a weaver.  Like many another legend the exorcism of a spirit involved an impossible task.

In the hamlet of Deancombe, not far from Buckfastleigh, there once lived a weaver of great fame and skill.

Though a clever weaver, Knowles, as he was called, was a thoroughly evil character.  Greedy and thoroughly selfish, he was also a malicious gossip and a nuisance to all his neighbours.  In spite of all this, or possibly because of it, he appeared to prosper and, at the time of his death was a very rich, if not a very happy man.

In spite of his evil ways and unpopularity, he was given a splendid funeral in true West Country style; and the old time West Country folk certainly knew how to bury their dead.  A splendid repast was prepared for the mourners who, in spite of old Knowles’ unpopularity, came from near and far.  The weaver of Deancombe had a fine send off with nothing spared.

The morning after the funeral the old weaver’s son, who was quite unlike his father, being kind, generous and very popular locally, arose early, eager to start his new life and to make amends for his father’s misdeeds.  As he came down to breakfast he was shocked and horrified to hear a familiar sound – the steady beat, beat of his father’s loom working away in his old workroom upstairs just as it always had.

Drawn, in spite of his terror, the son crept upstairs and, on peeping through a crack in the door, saw his father working as before at his loom just as skilfully as when he was alive.

The son crossed himself, “This is work for the parson,” he thought and set off immediately for Dean Prior to fetch the parson.  The parson, seeing the son’s obvious terror, returned with him immediately and together they went to the foot of the stair.

"Knowles!" called the parson in a firm commanding voice, “come downstairs! This is no place for thee.  Thou are in thy grave.”

To the son’s surprise, there was an immediate assent from the ghost of the old weaver.  "I will, as soon as I’ve worked out my quill," which as everyone knows is a shuttle full of wool.

"Nay!" declared the parson, "Come at once. Thy life’s work is done".  At that the ghost or spirit obediently left the loom and came docilely down the stairs whereupon, the parson confronted him, threw a handful of earth which he had brought from the churchyard, into the apparition’s face causing it to change into a large coal black dog.

"Follow me" commanded the parson, bible in hand, and together, all three of them led by the parson proceeded to the entry gate of the nearby wood.  On entering the wood the son heard a great noise as of a mighty wind blowing through the trees and the 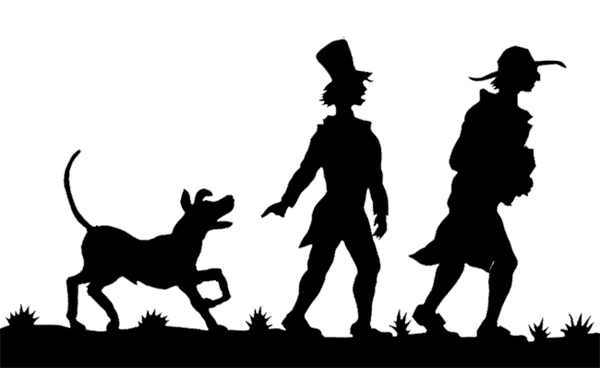 branches and trunks bent as in a gale.  Stooping down, the parson picked up a nutshell with a hole in it, then he led the hound to a pool formed by the Dean Brook near Deancombe.

"Take this shell" commanded the parson, "and when thou hast emptied the pool with it, so then shall thy spirit rest."

It is said, that the black hound still works unceasingly baling out the pool with a nutshell, but it is only at midday or at midnight, as the clock strikes twelve that the sight is revealed to human eyes.