The Story of Clotted Cream

The Story of Clotted Cream

As was the custom among giants, Blunderbus had more than one wife, four to be exact.  Of these wives Blunderbus had one particular favourite, Jennie the youngest who was beautiful, kind and loving, but who, unfortunately, had never learned to cook.  Blunderbus loved his young wife and used to sit and talk with her and bring her presents.

Now the other three wives, who had never ever been of a particularly pleasant disposition, were, quite naturally, jealous of Jennie and decided to make life difficult for her.  They gave her all the difficult and dirty jobs, making her work from early in the morning till late at night fetching water, lighting the fire, cleaning the pots and pans and doing all the nasty jobs they could think of.  In spite of all this Jennie still remained cheerful.  As long as she could be with her beloved Blunderbus she was happy.

This did not suit the other three wives, they decided to make life as uncomfortable as possible for Blunderbus until he got rid of his favourite.  They burnt his food, made sure his bed was lumpy, refused to keep his clothes clean and nagged him from morning till night, until at last, tired, dirty and suffering from indigestion he gave in and promised to get rid of Jennie.  He could not let her go completely so he installed her in a cave on the Cornish cliffs where he could visit her secretly as often as he could escape from his other wives, but both he and Jennie were sad at their parting.

One day, while Jennie was sitting quietly weeping in her cave, she heard voices outside on the rocks below.  Making sure not to be seen or heard, she carefully looked out of her cave and saw a group of fierce looking men and, overhearing their conversation, found out that they were plotting to wreck a ship.  They were Cornish wreckers.

Jennie was terrified, her first thought was for her own safety, then she though of the poor sailors who might lose their lives and decided she must do something even if it meant putting herself in danger.

That night she saw the wreckers leading a hobbled donkey with a lantern attached to his saddle along the cliff tops.  This is an old wreckers ruse to make ships think that there is another ship and that there is plenty of deep water inshore.  Horrified, Jennie saw the lights of the ship turning and heading towards the treacherous rocks below her cave.  Frantically she heaped up bushwood and driftwood and, striking a flame, set them alight.  The ship realising the danger dropped anchor and sent a boat inshore to investigate.

The wreckers, furious at losing their prey, were hunting for Jennie when they were overtaken by the sailors and slain without mercy.

The Captain of the ship, a Phoenician, thanked Jennie and asked her what he could do for her in return.  Jennie, happy at last to have someone to talk to, told all her troubles to the Phoenician captain who listened sympathetically.

Now the captain realised that, though Blunderbus deserved his fate for not standing up to his wives, Jennie would only be happy if she were reunited with her beloved Blunderbus, “My dear” he said, “I have a recipe for the most wonderful food you have ever tasted.  I will teach you how to make this and one Blunderbus has tasted it, he will never let you leave his side again”. 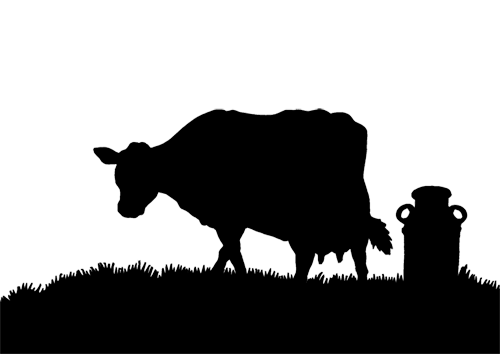 The recipe was for clotted cream or clouted cream as it was then called.  On Blunderbus’s next visit Jennie fed him some of this wonderful new food.  Blunderbus was amazed and delighted with his clever young wife, and immediately took her back with him to Dinger Tor.

The other wives were annoyed at first, but on tasting this delicious new food welcomed Jennie back and entreated her to show them how to make it.  Jennie showed them, and eventually the fame of this clouted cream spread through Devon.  People came from all over Devon to learn about the new food and how to make it.  The three wives were happy to be so important and sought after, and spent their days teaching the many visitors how to make clouted cream.

Meanwhile Blunderbus and Jennie were able to live happily together free from indigestion and from the envy of the other three wives.

Devon is still famous for clotted cream, so the next time you enjoy one of our famous cream tea’s, remember you owe it all to Jennie the lovely young wife of Blunderbus of Dinger Tor.