During the study students will have opportunities to:

Key Question: What is the secret of the standing stones and cists?

Explain to the students that around 3500 - 4000 BC (between 5,500 and 6000 years ago) and after nearly one million years, the Stone Age began to come to an end in Britain. Something happened about this time that changed the world forever.

Tell the students that you are now going to show them a short film without any dialogue Resource 1 - which shows a specific technology and process involving metals.

Watch 'How to make homemade bronze'

What is the relevance of this to Dartmoor and particularly the Stone Age? Encourage discussion and reasoning.

People discovered that when copper is heated and mixed with tin (a process called smelting) it creates bronze. This was a great advance because bronze wasn’t only harder and stronger than either copper or tin, but it was also much easier to melt, mould and shape. Unlike stone tools those made of bronze could be sharpened again and again making them much more long-lived.

The film in Resource 1 shows bronze being created today with modern equipment and technology.

This discovery enabled Bronze Age people to manufacture a wide range of items to use in many aspects of their lives. Resource 2 and Resource 3 contain examples of such Bronze Age artefacts that they left behind.

Can the students identify what each artefact is and how people would have used it in their everyday lives?

When the students have completed this exercise ask them to reflect on how all of these items show progress or advancement in the way people were living compared with the Stone Age. For example:

This leads on to the second question in the study.

▼ Question 2: Why do people build monuments?

Ask the students what they think the word monument might mean?

In order to encourage discussion show the students the image below (Resource 4) and explain that this is a monument. Does anyone recognise the person in the statue? 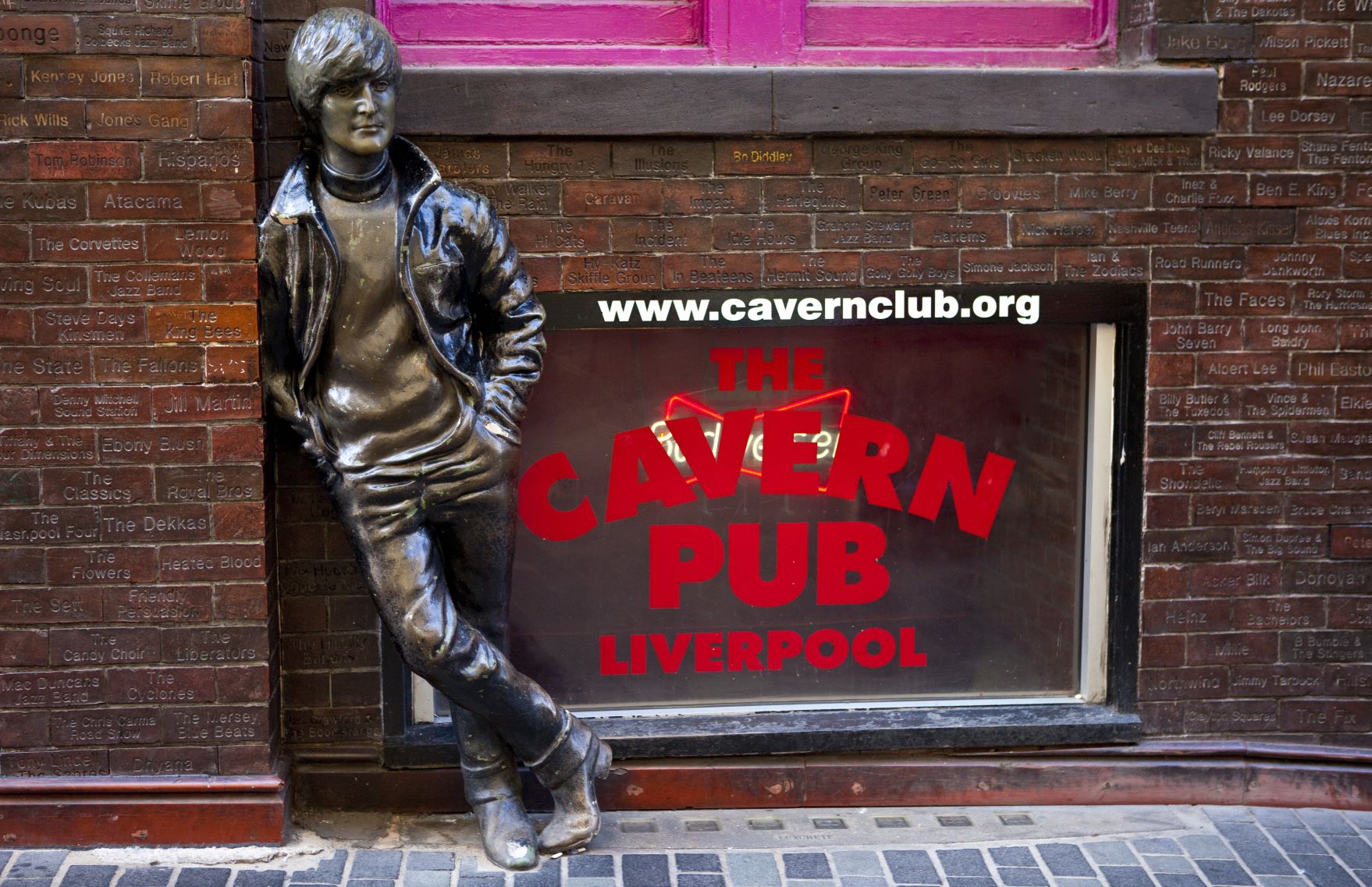 This is a statue of John Lennon outside the famous Cavern Club in Liverpool where The Beatles first played together as a group in the early 1960s. The statue was created and erected after John Lennon died in 1980. Do the students have any further thoughts as to what a monument might be?

Next show the students the five very famous and well known monuments in Resource 5 (PDF). Do they recognise any of them?

All of these are monuments. Are there any monuments in the local area to add to this list such as statues or war memorials?

So what are monuments then – something that has been constructed like a statue or building, as a symbol to commemorate (celebrate, remember or show respect) for an event, notable person or spiritual belief?

How many are there in your local area? Researching this could form part of a local investigation of notable people and events associated with significant periods of history.

Students could be given the task of answering the question: Why is there a monument to (could be a person, event, animal, a religious faith etc.) at ………….?

Here the ‘local area’ needs to be defined over a sufficiently large enough area for students to locate statues, buildings, memorials that they can investigate. This question also provides an opportunity for an extended piece of homework research into a monument of global significance such as any of those in Resource 5 with the objective of ensuring that as well as describing the structure the students also explain its significance.

Explain to the students that during Bronze Age in Britain hundreds of monuments were constructed all over the country that remain to this day – about 4500 years later. However, unlike more modern monuments such as those in Resource 5 that they have been studying, the purpose and significance of Bronze Age monuments remain a mystery.

▼ Question 3: Why did Bronze Age people build monuments at Merrivale?

Explain to the students that Bronze Age people also constructed many monuments in Britain with over 1,300 still to be seen across the country.

Almost all of the monuments that Bronze Age people built were mostly made of stone (although there could well have been long decayed structures of wood or decorations of cloth associated with them as well). One such monument can be seen today at Merrivale in Devon.

Resource 6 is a detailed description from the website Legendary Dartmoor, which includes helpful maps that can help explain the site without visiting.

Divide the students into groups of three or four and then ask each group to examine Resource 6. These are the stone monuments at Merrivale. Encourage discussion and speculation. What can they identify and describe?

At Merrivale there are:

Tell the students that archaeologists and historians don't really know what the exact purpose of the monuments at Merrivale were. What is obvious however is that this site was of great importance because constructing it by hand and then maintaining it would have involved the work of large numbers of people over many years.

Before moving on, ask the students to think about what other things might have been constructed originally at Merrivale but have since disappeared entirely because they were made organic material such as wood or cloth that has decayed. Today we only see the harder and more resistant grey rock.

One theory is that Merrivale may have been a place where Bronze Age people gathered together at times during the year for important ceremonies, to observe the skies and to bury the highest ranking people in their communities. The stone rows and stone circle have undergone detailed metrical and astronomical analysis and one possibility is that the stone rows were deliberately aligned to point towards particular constellations in the night sk,y or the movement of the sun and moon at particular dates and times in the year such as the summer solstice on June 21st.

Other explanations have also been proposed – what do the students think?

▼ Question 4: Who was buried in the cist at Merrivale?

Show the students the photograph of the cist (Resource 7) at Merrivale and remind them that only two such burial chambers have been found among the monuments. 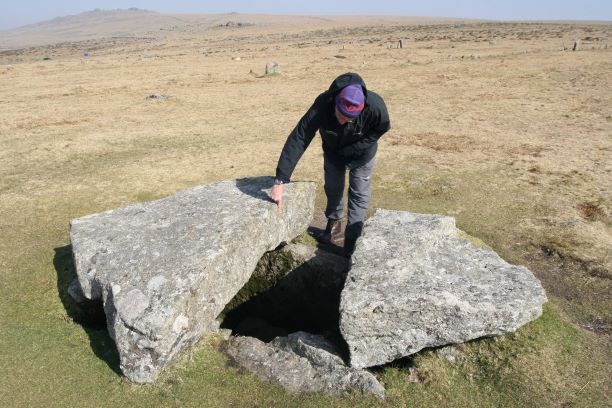 This is by far the larger of the two measuring over two meters long and 1.5 meters in depth and still has most of its capstone. No one knows who was buried in it or why but it would have taken a large group of people many days to dig and line and cap with granite. Whoever was buried within it would clearly have been very important but no evidence of who they were or what they did remain. This is because the soil at Merrivale on Dartmoor in Devon is peat-based and acidic which means organic material of any kind in the ground decays away very quickly. The cap-stone was split by a farmer or landowner in the 19th Century, before the value of the monument was recognised, and the marks that were made during this splitting process are being pointed at.

During the Bronze Age it was common practice to bury deceased high status women and men (either their body in a foetal position or cremated remains in an urn) in individual stone lined graves or cists in special ceremonial places such as Merrivale. Burials were accompanied with the laying down of grave goods including food, drinking vessels and body ornamentation.

In richer burials, gold sheet work was attached to clothing, and later still pins, tweezers, and razors were found. Wealthy and ‘elite’ women in death might wear fine jewellery, while men were laid out with their weapons, be they finely knapped arrowheads early in the period, or bronze daggers in a later period. The fact that so many bodies were laid out with food and drinking vessels seems to suggest that our Bronze Age ancestors believed in some form of life after death at least, and that not only were the dead thought to be capable of enjoying their grave goods, but that the afterlife required tools and utensils very similar to those used when they were alive.

Now ask the students to consider the large empty cist at Merrivale and to imagine that 4000 years ago it was prepared to take the body of a very famous warrior chief. Imagine that he had lived to over 50 years which was incredible for that time and all of the people in the area admired and respected him for what he had achieved on their behalf. He would have certainly been a capable warrior but would have also overseen the setting up of all of the local settlements in which people lived and farmed as well as negotiating trade deals with other Bronze Age communities across the south west. Above all he would have been responsible for maintaining peace and a stable life for everyone much like we look to our elected politicians and Prime Minister to do for us today.

We know that he would have most likely have been buried (inhumation) because of the size of the grave. Encourage the students to think what mourners from communities near and far might have buried with him as a tribute to his great achievements on earth and also for him to use again in the afterlife.

Together they must agree only ten things to place in the cist with the warrior chief.  What should they be? Encourage the students to look at the goods discovered in the graves of the most important Bronze Age burials so far discovered in Britain.

After agreeing which artefacts should become grave goods the students could draw and label the inside of the grave to show the body on its side in a foetal position surrounded by each of the named items.

To conclude this scheme of work ask students to watch this YouTube film: