During this study students will:

▼ Question 1: What are Dartmoor’s mires and why are they so important?

The Hound of the Baskervilles

Distribute copies of Resource 1 (PDF) and explain to the students that what they are about to read together is a description of a mire taken from a very famous novel about the fictional detective Sherlock Holmes called 'The Hound of the Baskervilles' written by Arthur Conan Doyle and published in 1902.

Read through the extract several times with the students ensuring understanding of key vocabulary particularly that is used to describe the features, smells, textures of the mire along with the emotions of those who were experiencing trying to walk across it.

Ask the students to think about what kind of place is being written about in the extract.

In his book Conan Doyle called this place Grimpen Mire but he was in fact writing about a real place called Foxtor Mires on Dartmoor which he had visited – he just changed its name.

In Resource 2 (PDF) there is an Ordnance Survey map extract of Foxtor Mires. Divide the students into pairs and provide each with a copy to examine.

Students should be helped to reach the conclusion that Foxtor Mires is in a hollow or valley between two hills into which four rivers flow making it a very marshy and boggy place.

Now return to the map in Resource 2 and ask the students to see if there are any clues suggesting what the soil might be like in the area of Foxtor Mires? What does the word ‘peat’ mean, as in the name 'Peat Cot' on the map?

Peat is a damp, dark soil that is made of organic matter such as plants, mosses and even trees that hasn’t decayed properly. Over millions of years it can build up to become many metres deep.

For information a cairn is a pile of stones of prehistoric origin (so before the Roman occupation of Britain) that formed a monument, tombstone or perhaps a landmark to guide travellers crossing the area. Similarly a cairn cross is a cross made of stone and a cairn circle a stone circle and a cist (pronounced ‘kist’) a granite lined coffin dug into the peat topped with a horizontal slab of the same rock.

Before moving on show the students the film of someone walking across Foxtor Mires (a very dangerous thing to attempt if you do not have a detailed knowledge of the place).

Now we are in a position to sum up what a mire is based on all of the information looked at - water-logged marshy and boggy areas of deep peat that have formed in hollows or valleys on Dartmoor.

For plants and animals mires are very challenging habitats or natural homes in which to live because the peat soils are very acidic (have a pH below 7), waterlogged (filled or soaked with water) and lacking in nutrients such as nitrogen. As a result any flora (plants) and fauna (animals) that live in mires have to be adapted or particularly suited to survive in such conditions.

Distribute copies of six plants and animals that are commonly found in the mires of Dartmoor in Resource 3 (PDF). Divide the students into pairs and encourage each to speculate about how each is adapted or particularly suited to living in mires.

Next show the students the short film 'Magnificent Mires' produced by Devon Wildlife Trust. The narrator says about the mires ‘that you must be tough and remarkable to live here’. In addition to the five species that the students have already considered how many others are shown in the film living in the mire habitat?

Further detail about Dartmoor’s bogs and mires, and their relationship to other types of wetland habitat together with associated species and some of the challenges of managing these environments can be found in our bogs and wetlands factsheet.

▼ Question 2: What has peat got to do with Climate Change?

Distribute the photographs in Resource 4 (PDF). What do they show happening?

Large excavators are working on some of the Dartmoor mires – but doing what exactly? Look particularly at the ‘before’ and ‘after’ photographs of the same place at the bottom of the page – before on the left and after on the right.

After discussion and feedback of ideas move on to show the students the film about Winney’s Down.

Over hundreds of years the mires and bogs of Dartmoor have been drained or dried out either for peat digging or so that farm animals can graze the land. Drainage ditches have been dug to drain water away from mires and peat bogs that can be seen from a long way away (see photo below). 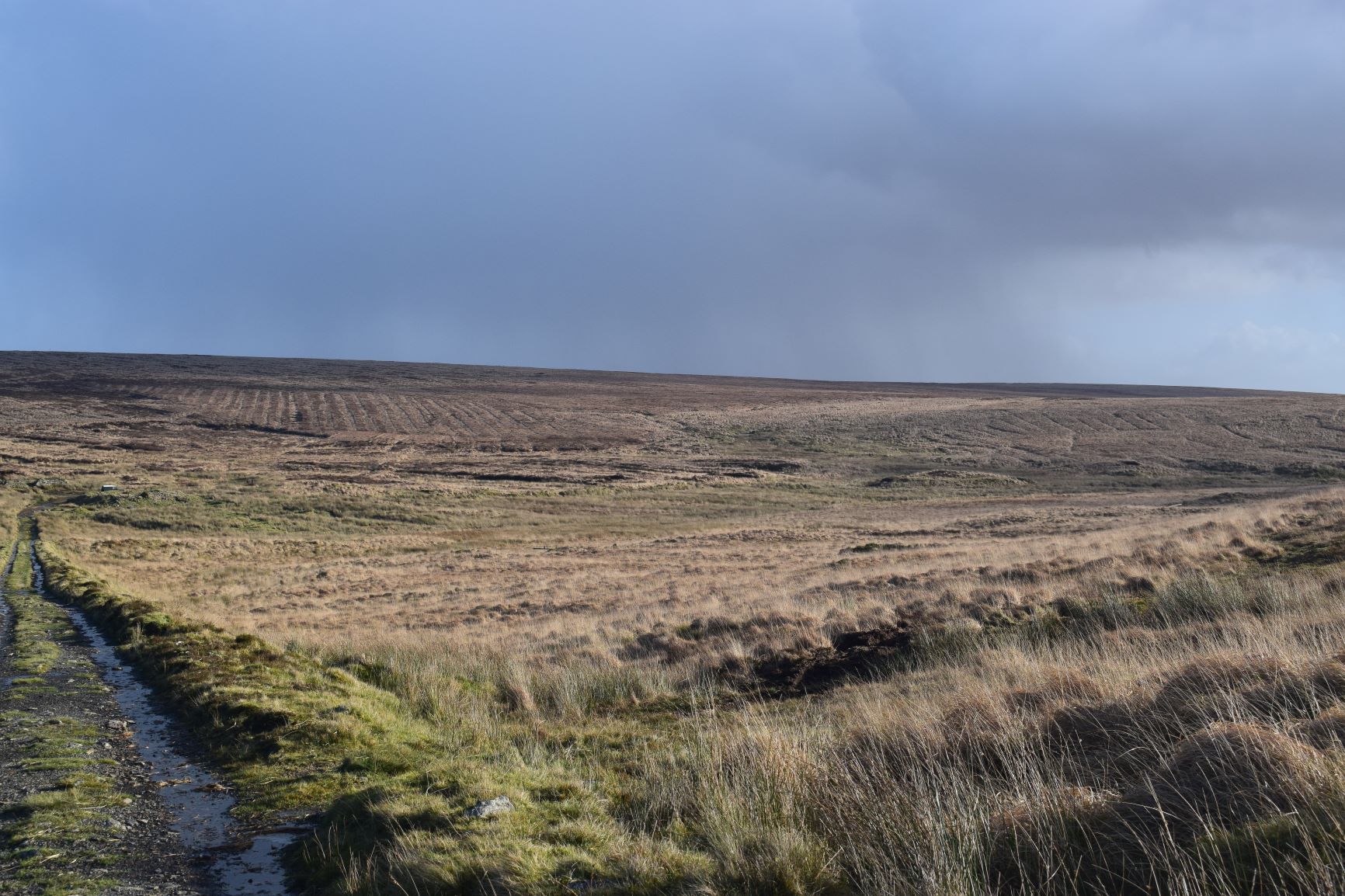 For the past ten years or so Dartmoor National Park has been working to restore mires and blanket bogs that have dried out to their original waterlogged condition. Excavators are used to move peat blocks into place in the gullies and ditches which have been dug for peat and farming. These blocks then trap rainwater behind them forming small, shallow pools. These pools provide ideal conditions for bog plants to recolonise naturally and for peat to build up once again.

It’s really important to keep the mires waterlogged in order to conserve their biodiversity (all the different species of plants and animals that live in them) but can the students think of any other reasons why it’s vital to keep them wet and not allow them to dry out? As a clue show the graph in Resource 5.

Farming also contributes to the release of greenhouse gases. For example the digestive systems of the 70 billion farm animals in the world generate and release huge quantities of methane and nitrous oxide (296 times as potent as a greenhouse gas as carbon dioxide) and methane (23 times as potent as a greenhouse gas than carbon dioxide). Rice (the most important food crop in the world and feeding half the world’s population) is grown mostly in flooded (paddy) fields. Bacteria in the waterlogged soils give off large quantities of both methane and nitrous oxide.

Explain that carbon dioxide is one of several gases in the atmosphere contributing to what geographers call the greenhouse effect – the gradual warming of the Earth’s atmosphere.

One of the marvellous things about mires is that healthy waterlogged peat actually removes carbon from the atmosphere as it forms new layers and increases in depth. It has been estimated that 10 megatonnes (1,000,000,000 kilograms) is already stored in the peat soils of Dartmoor.

If the peat on Dartmoor is left to dry out then the carbon it contains will be released into the atmosphere (a process called oxidation), contributing to climate change. However if the peat mires and blanket bogs of Dartmoor are kept wet and healthy they will continue to grow and remove carbon from the atmosphere at a rate of 0.7 tonnes per hectare per year. This is known as carbon capture or carbon sequestration and is a very important way to help mitigate (make less severe) the effects of climate change.

Now that climate change has been introduced there is scope to follow up with further investigations:

What is Dartmoor National Park doing about climate change?