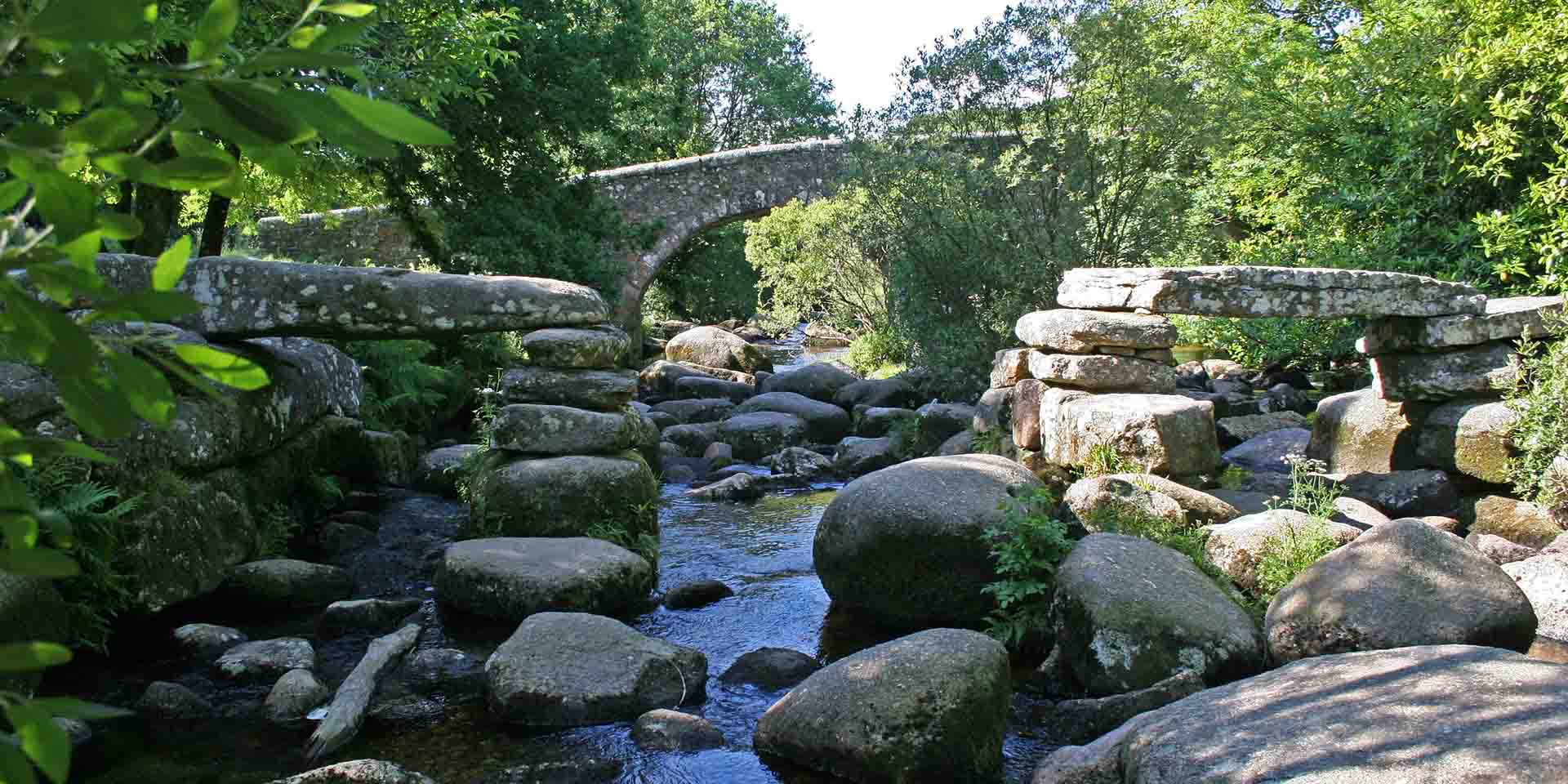 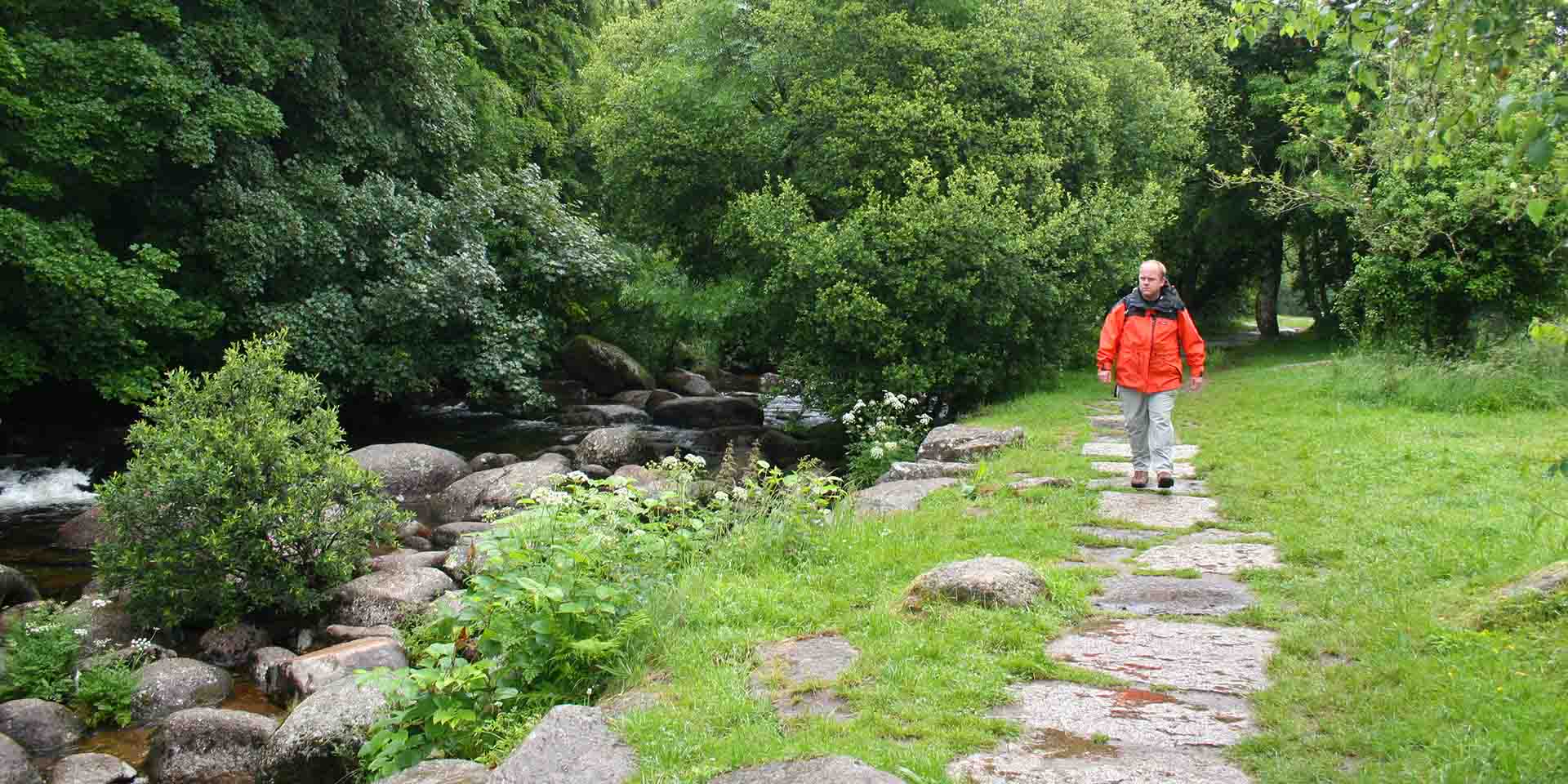 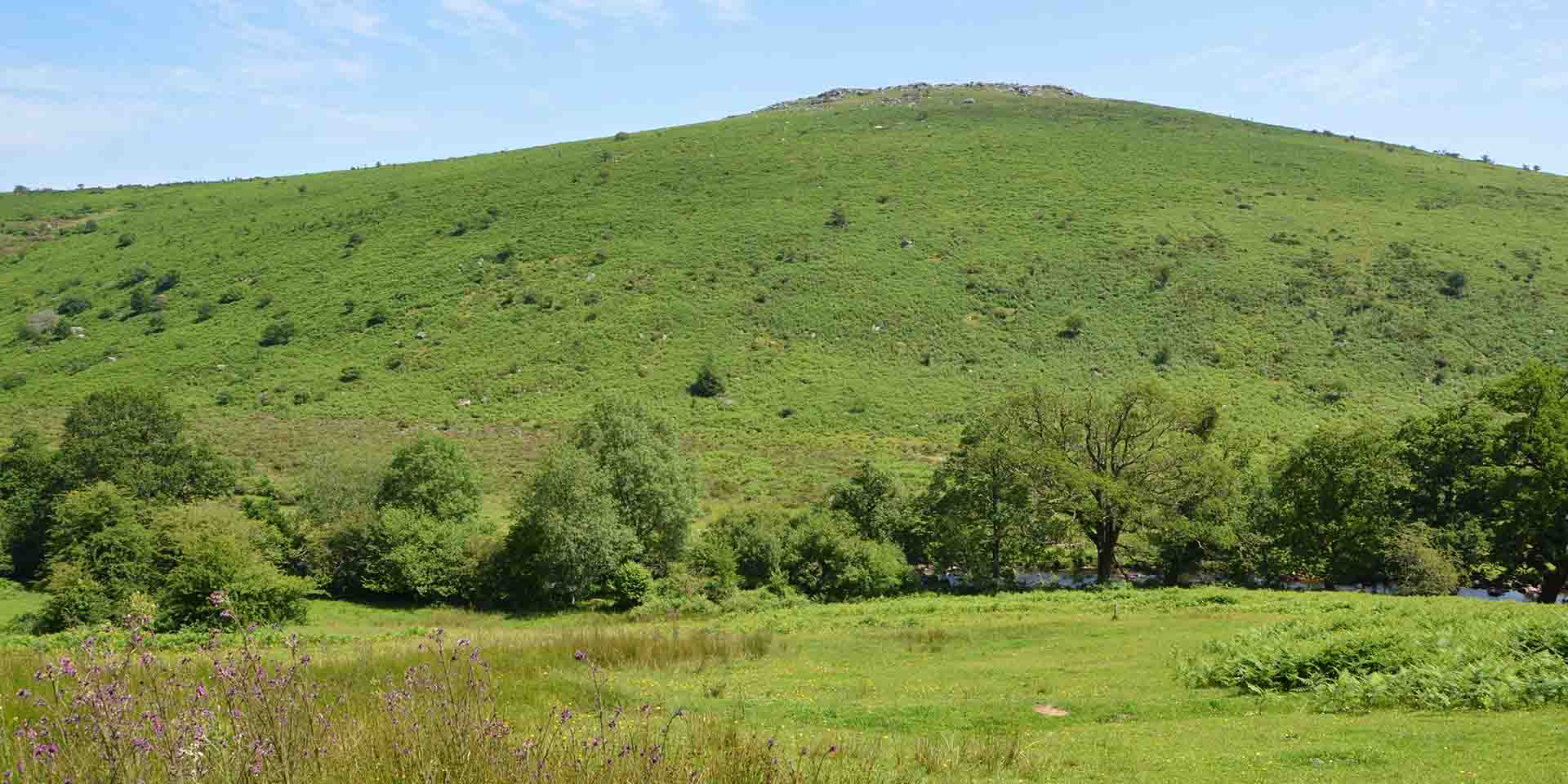 Summary: This walks starts at Dartmeet where the East and West Dart rivers meet, the two major tributaries of the River Dart. You will explore the river valley of the East Dart, see ancient river crossings and have an opportunity to learn more about mining on Dartmoor.

From the main car park, follow the path at the top of the car park to the right hand side of the entrance to Badgers Holt. Follow the footpath through the woods, keeping the old wall on your left hand side. When you reach the end of the wall drop downhill about 20 metres towards the river and take the well-defined path, keeping the river on your left. Make your way along the river, you will come to an obvious clearing.

As you walk along the river look out for all sorts of dragonflies, damselflies and butterflies, species you might see include the Golden Ringed Dragonfly, Keeled Skimmer and Small Pearl Bordered Fritillary. If you’re really lucky you might catch a glimpse of a Kingfisher or try looking for signs of otters, such as footprints in the sand or spraint on the rocks.

Continue walking along the river, you will pick up another clear path, taking you back into another wooded area. The route here becomes rocky, pick your way over the boulders, over a small stream and carry on up the river.

Carefully cross the stepping stones and bear left, following the river downstream. At the end of the wooded area you will come to a gateway. After the gateway follow the bridleway as it swings uphill slightly to the next gateway and an old ruined cottage known locally as Dolly’s Cott. After passing through the gateway by the cottage, walk across the field to the next gateway and follow and follow the track uphill where you will reach Brimpts Farm.

At Brimpts Farm you can visit the Tin Mine Display, created by the Dartmoor Tin Research Group and learn more about Tin Mining in the area. Dartmoor has a rich history of tin exploitation dating back to at least the 12th Century and continuing through to the 20th century.

Early miners extracted the tin ore they found in streams beds through a process called ‘tin streaming’ which has altered almost all of Dartmoor’s stream valleys. As these easily worked sources were exhausted they began to mine from the ground using deep trenches and eventually underground workings. During medieval times tin working became increasingly important and stannary towns were established around the moor to oversee the industry for the Crown. Tin mining went into decline in the post medieval period, but with new Victorian technologies many mines were re-established and new mines exploiting copper and iron were set up.

Brimpts Farm dates to the medieval period and is one of the ‘Ancient Tenements.’ The occupants of these farms had special rights allowing them to farm within the Royal Forest of Dartmoor in return for undertaking various duties, especially rounding up animals grazing on the moors.

Continue along the track through the main farm buildings and join the main farm lane. Follow the lane uphill away from the farm and at the top of the hill bear right off of the main lane onto a wide wooded track, follow this track until you reach the road. When you reach the road turn right along the road, at the T junction turn left signposted towards Hexworthy. Follow the road downhill until you reach a second track on your left opposite Huccaby Farm, bear left up the track towards a gateway keeping the farm buildings on your right.

Before taking the track you can walk a little further down the road and visit St Raphael’s Church. The Church was built in 1869 as a mission chapel to bring the gospel to those who lived too far from the parish church in Lyford, which to visit required a lengthy passage across Dartmoor. The Chapel was a place of worship on Sunday and acted as a school during the week, the scholar’s desks remain in place today and are used as pews.

Enter the field and walk up the hill following the way marker posts. As you walk towards the brow of the hill take in the views across to Yartor Down. During the Middle Bronze Age (around 1,500 BC), like much of Dartmoor, Yartor Down was home to a thriving community. There are numerous hut circles and settlements and an extensive reave system. ‘Reave’ is a Dartmoor term for the remains of field boundaries which formed extensive systems marking out fields and enclosed settlements during the Bronze Age.

At the brow of the hill continue downhill towards a wooded area, go through the gate and onto the narrow track. Continue down the track, over the stile straight ahead to the end of the track. Bear left into the field, through the gate and follow the path to the bottom left hand corner of the field by the house. Take the footpath to the left of the house, with the house on your right. Upon meeting the road turn right over the bridge and back to the car park, stopping to have a look at the clapper bridge on your left as you go.

The modern road bridge at Dartmeet was constructed in 1792 as part of the toll road between Ashburton and Two Bridges. Its predecessor was a clapper bridge constructed of large slabs of granite which was partially washed away in 1820 and is still visible just upstream. This structure was part of the medieval network of packhorse routes across Dartmoor.

Back to Walking Routes